Activating BC communities to prevent and respond to opioid overdose

Applications to this grant fund are closed. Stay informed on grant openings by signing up for our newsletter.

OPEN’s goal is to activate mental health and substance use (MHSU) service providers across British Columbia to respond to opioid overdoses within their communities, equip them with overdose prevention education and response tools, and ultimately reduce harm to people who use opioid drugs.

In 2016, there were 978 illicit drug overdose deaths in British Columbia, the highest amount on record. Fentanyl was detected in 67% of these deaths, compared to 29% in 2015, and 25% in 2014. In response to this sharp increase, BC’s provincial health officer declared a public health emergency in April 2016. In September 2016, CAI approved $750,000 in funding to the OPEN project, with the goal of increasing the MHSU sector’s capacity to prevent and respond to opioid overdose. OPEN provides 11 convening grants to community-based organizations across the province, with special focus on activating community networks that address populations at greater risk of opioid overdose. Organizations receiving grants will collaborate with community partners in developing a local strategy aimed at addressing the opioid epidemic in their region, and have the opportunity to qualify for Local Action Grants. In addition to grants, the project also provides support to each organization through availability of evidence-based overdose prevention training, provision of Naloxone kits and other first responder tools, and facilitation of a collaborative knowledge exchange. 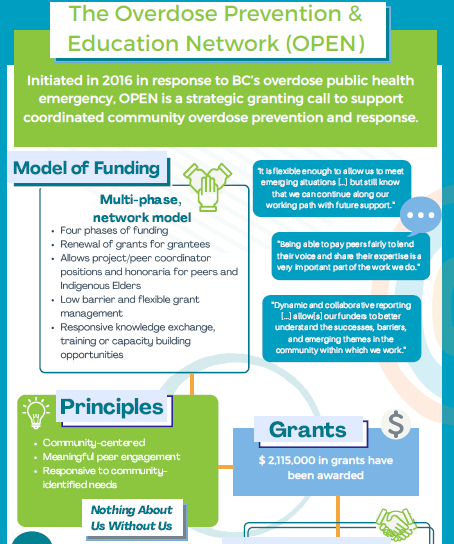